Here's an interesting site for those in the Snoqualmie area that points out the locations of various shots and locations from the early-90s TV series, Twin Peaks. It was filmed primarily in Snoqualmie and North Bend, WA. I never watched the show, but do know from living in Snoqualmie that it has a fanatical following.

Another site by the same author.
Posted by Unknown at 11:50 AM No comments: Links to this post

But this is some funny shit. Don't have any soda in your mouth when you go to this site (don't worry its G-rated).
Posted by Unknown at 11:38 AM No comments: Links to this post

A week in the Midwest

I spent a week back in the Midwest, seeing the in-laws, my cousins, uncles, aunts, my sister, and my folks for a while. What an interesting week.

Amy and the boys headed to Indiana a week before I did, and she used the opportunity to take the kids to Ohio to see her grandmother, to Lafayette to see Bob and Susan, see her friends, see her folks, and catch a White Sox game.

I started off with a boring flight to Chicago Midway and taking the Coach USA bus to Portage. I happened to catch the bus an hour earlier than I expected, as my flight got in 15 mins early and I was able to run out of baggage claim just in time to grab the bus. At the same time I just got a new phone (will blog about that later) and took me a while to figure out how to call Amy to tell her to pick me up early.

We spent that evening at my father-in-laws company outing at a water park in NW Indiana. Lots of fun, especially for the kids. Until the lightning storm came. How bittersweet. I miss everything associated with thunderstorms: the cold air moving in, scary dark clouds, flashes of light in the sky as far as the eye can see, reverberating instances of thunder, and rain so strong that will kick your ass (forget the umbrella). While that was great, I also had to drive through it for half an hour until we outran it.

We arrive at my folks place at 1 in the morning and find that the water pump is broken, so no running water. That was fixed the next day by my handy and resourceful uncle Kelvin, and that evening we went to the circus. The kids enjoyed that and I thought it was very well done for a "small town" show.

Next day had a get together at my cousin Angie's with about 25 of my family that I don't get to see often enough. Always good food and good laughs... even if nobody did fire a gun this year! Of course that's the day it started to cool off, and, expecting hot and muggy weather, I hadn't brought any cool gear.

After a couple of days there it started to rain - not as bad as the floods to hit Indiana (including our old plave we called home, Michigan City) and Ohio - but we did have a leak in the bedroom and my mom and I got up on the roof to see what the scoop was. We fixed that in short order.

Despite the rain, we got in some geoaching (10 caches on the trip) coupled with some short walks. We also enjoyed fresh corn from my cousin Lee's garden.

Our last day in Evart my cousin Shane showed the kids the Evart fire station, which of course any kid would think was cool.

We spent the last night in Chicago right outside Midway, and while we were in the security line for our flight back I realized I had lost my keys to the car and house. Good thing we have great neighbors as they brought us our spare keys to the airport for us.

Too short of a week, and I can't wait to do it again next August. Some pics from the trip follow: 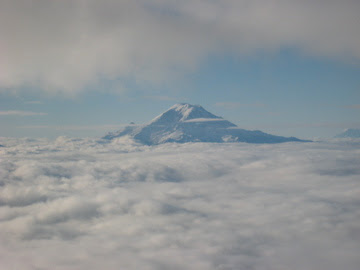 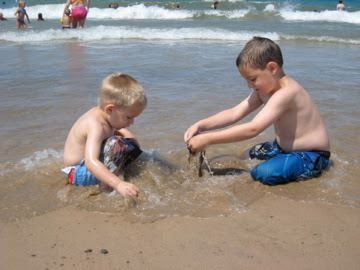 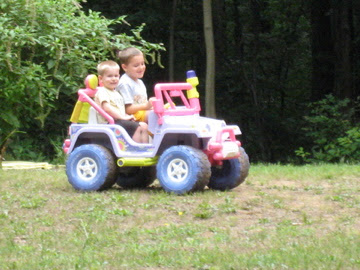 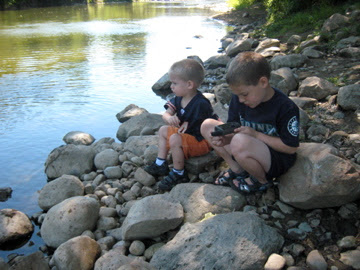 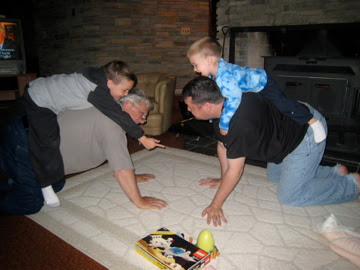 Posted by Unknown at 4:43 PM No comments: Links to this post

Arguably one of the top three things I miss from Chicago, I partook in a fine Wreck (Roast Beef, Ham, Salami, Turkey, and Swiss... toasted) sandwich just south of Midway this evening. We need Potbelly's in Seattle, that's for sure.

I must say, this is quite nice, enjoying a fifth story view of Midway Airport and downtown Chicago on a nice summer evening. A nice end to a nice week getaway to the midwest (which I will blog about later).
Posted by Unknown at 8:15 PM No comments: Links to this post

Seattle is Indian for WTFLand

First, quickly read this article. Now, let me get this straight - this article is newsworthy enough to print. That is, the Seattle P-I believes this story is on the up and up, and believes that the Seattle community should be on the lookout for two suspicious individuals taking a keen interest in the Washington State Ferry boats. However, the Seattle P-I doesn't beleive that photos would be helpful to identify said passengers??? Can I get a 'WTF'?

Never fear, however, as Northwest Cable News has no problems publishing said pictures. Not surprising NWCN broke the story 12 hours before the Seattle P-I.

Of course, on the next terrorist incident to hit Americans (like anyone else fighting to take tools aware from our intelligence and law enforcement agencies), the P-I will be the first to whine "why weren't we able to stop this?"
Posted by Unknown at 7:53 PM No comments: Links to this post

The Reagans joined the world of the 21st century by getting set up for HD via Directv. I have been waiting for a deal from Directv before embarking, as I didn't want to drop $200 on a new HD setup and another $300 on a new HD DVR. As it turns out, we ended up getting the HD dish and receiver for free (part of being loyal NFL Sunday Ticket customers) and they dropped the lease price on the HD DVR to $200.

The channel selection is pretty weak right now. We get two HDNet channels, ESPN and ESPN2, Discovery Channel, TNT, and two other apparently irrelevant channels as I can't remember them right now. But the good news is we will get NFL Sunday Ticket in HD, so we can see the Lions get their asses whupped in fine grained detail. Cool.

The HD DVR is a pretty good device. Most people complain that it's not as good as Tivo, but I never had TiVo so apparently I literally don't know what I am missing. It's better than Windows Media Center, in that the searches for programs is better and I have better control over managing my shows. I can choose to keep a set number of shows, for example, and delete the older ones.

As part of installation they replaced our old dish with one that processes HD and has two lines coming out of it. They both run to our HD HVR so we can record two shows at once or we can watch one show while we record another. Way cool.

The DVR can store 100 hours of programming, and I assume that means 100 hours of HD although I should probably look that up.

So far (only 1 month) I'm happy. I'll post again once the NFL season comes and I see how many games are actually on HD.
Posted by Unknown at 5:19 PM 3 comments: Links to this post