Lions turn the offense around against Nobody

DETROIT (AP) - It took the offense almost three quarters to get rolling, but the Lions showed some spark in the second half and cruised to a 26-0 victory against Nobody this afternoon at Ford Field.

Not wanting to waste a bye week, Lions head coach Steve Mariucci set up a scrimmage against Nobody. Expecting the Lions to throw the ball around at will and run up the score, Mariucci was surprised that the Lions weren't able to punch it in the end zone in the first half.

"We did get the ball into the red zone a couple times in the first half. But very disappointed we couldn't punch it in with no defenders out there."

Tight end Marcus Pollard, one of the few bright spots for the Lions this season, lit into the Lions at halftime. "Do you guys realize there's NOBODY out there? Kevin Jones, why do you keep falling down after two yards? And Joey got sacked three times for christs sakes!" His tirade seemed to spark the Lions, who took the opening drive 80 yards on 12 plays and scored the first touchdown of the game on a 6 yard run from Kevin Jones. The key play on the drive was a 19 yard pass to Mike Williams on third-and-16.

"At first I didn't believe him; but he was right... there really wasn't anyone on the field," said an exhausted Kevin Jones after the game. "I was so used to diving to the ground rather than taking on a defender that I hadn't realized there was no defense on the field."

The offense was a little disappointed that they didn't get to line up against an opposing defense.

"We spent all work working on our hitting and tackling drills to be prepared when Joey throws all those interceptions. To not get to hit an opposing defensive back was a little disappointing," whined Lions' offensive tackle Jeff Backus.

"Good news is that Joey didn't give up any touchdowns this week, so that's a positive," said Mariucci. "We'll see whether he can carry that momentum next week against Tampa Bay. Probably not, but I'm stuck with him since Matt Millen wasn't bright enough to pick up a decent quarterback in the off-season."

On the down side, wide receiver Charles Rogers broke his left collarbone again after tripping over the 35 yard line in the fourth quarter. He'll be out the rest of the season.

In the meantime, defensive coordinator Dick Jauron used the opportunity to give his defensive unit a workout against the Southwest Detroit Under 14 All-Stars.

"While not in the same league as the NFL, clearly these 13 year olds give us a step up in competition from what we usually face during the week. We had a good workout and expect to be better prepared for Tampa Bay than if we had faced off against the Lions' offense."

The Lions face Tampa Bay next week where the Bucs are currently a 532 point favorite.
Posted by Unknown at 10:32 PM 1 comment: Links to this post

So I finally catch a Purdue game on TV...

and wow do they have some work to do. All that experience and no playmakers. Sheesh. And Brandon Kirsch, who I had high hopes for, did not do a good job reading the defense or hitting open receivers. And when he did, Dorien Bryant liked to make a habit out of dropping the ball. And don't get me started on our linebackers inability to fill the gaps against the run or cover the TE (gee if you're not going to defend the run at least cover against the pass!).

I made a prediction back in 1999 before the bucket game that Tiller would never see a 10 win season at Purdue based on their playcalling, game prep, and lack of team discipline. While Purdue will continue to enjoy winning seasons and bowl games under the Tiller regime, Tiller and his staff just don't seem to be able to build that elite program that has talent, leadership, a killer instinct, confidence, and a little swagger.

Huge game this weekend against ND. A win, and that's three in a row over ND, and puts Tiller at 5-4 over the Irish. Not to mention kids (recruits) from the midwest continuing to regard Purdue as a better program. A loss? I think that's more than a damper on the season (Purdue would fall from the rankings)... I think it potentially leapfrogs ND past Purdue in the eyes of the media and perception of the program.

POTFI!
Posted by Unknown at 10:19 PM No comments: Links to this post

A quick trip out west

I've always perceived Seattle as being on, or very close to, the Pacific Ocean. In reality, Seattle is about 60 miles east of the ocean. And, since we've been here, we haven't wandered west of Seattle (I did play golf over in Port Orchard, but I was new to the area and didn't even know where we were headed until I got home and looked up the name of the town we were in).

Washington also has a large ferry system; when we lived in our apartment in Seattle we (especially Spencer) would watch the ferries go in and out of the docks all day long. Yet, to date, we hadn't been on one.

We killed both those stones this weekend with a ferry trip to Bremerton and a drive up to Port Townsend. One of the cool things of being new to the area is we really don't know what to expect in any of these towns, on any of these drives, so its somewhat of an adventure.

We took a night ferry ride from Seattle to Bremerton. Very nice hour-long trip on the water with some nice views and a relaxing ride.

Port Townsend we had heard was nice; Bremerton we had no clue what to expect other than it was our ferry destination. Turns out there wasn't much to see or do in Bremerton, although there was a naval shipyard there with a couple of aircraft carriers in dock. Way cool for those with high levels of testosterone. I kept finding excuses to drive past it! I wish I could say we stayed someewhere interesting, but not knowing the area we played it safe and stayed at a hotel. But it had a pool so Spencer was happy - it was also Garrett's first venture into a pool.

The drive up to Port Townsend, about an hour from Bremerton, was relaxing as well. That whole area reminded me of the thumb area of Michigan - not densely populated, but not boonies either. Found a state park in Port Townsend that had a "beach." Spencer had fun, and it was interesting seeing the crab shells on the beach.

Overall a nice quick weekend getaway that allowed us to get to know the area a little better. I've attached some pictures. Or at least I'm trying to attach some pictures.
Posted by Unknown at 9:11 PM No comments: Links to this post

Was stuck this evening with an Internet Broadcast of a Phoenix station carrying the Purdue game. Would like to stream that audio from my office to my Bose Wave radio sitting in the kitchen so I can work and listen to the game. Currently I can also stream iTunes content to it (no big deal for me since I manage all my MP3s through iTunes).

So, what's a Purdue geek to do? Download Airfoil from Rogue Amoeba. It allows you to stream any audio to Airport Express. Highly skeptical, I downloaded the demo, and voila! Just one click to select the app I want to stream (in this case Internet Explorer), and next thing you know the game is playing in the kitchen. Way cool. Chalk one up to innovation and ease-of-use.
Posted by Unknown at 8:02 PM No comments: Links to this post

So I'm a little slow

Microsoft and Amazon are sponsoring a Web Services developer contest. Glad to see Web Services progress to this state where both businesses and technology companies are supporting.
Posted by Unknown at 8:54 AM No comments: Links to this post

How 'bout them Lions taking the Packers out behind the woodshed. Nice start to the season, and the defense played outstanding. Still need a decent QB, though (sigh).

I must say, this is going to take some getting used to on the left coast. Kickoffs at 10am; at noon, when games are supposed to be getting underway, we're in the second half. The "night" game is getting over at the time I'm used to it kicking off. Doesn't sound like a big deal, but for a long time fall Saturday and Sundays have been a consistent routine, and boy is it weird adjusting.
Posted by Unknown at 10:45 PM No comments: Links to this post

Enough said.
Posted by Unknown at 8:07 AM No comments: Links to this post

Purdue gets a game under their belt 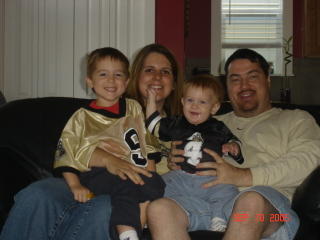 Hard to say Purdue is off to a "good start" as their opener was a tune-up against Akron; nonetheless it's good for them to get a game under their belt. A little concerned that a defense that returned 11 starters is giving up that kind of yardage to a MAC school, but that's what openers are for.

Very weird not attending the game in person. 12 years or so of season tickets and pre/post game tailgating puts one into a routine.

Another weird thing? Catching games at 9am here on the left coast. Sheesh, that is just too early. I liked 11am starts in Chicago; 9am is going to take some getting used to. Flip it around, though, and the 5pm starts for the night games is very nice. No more staying up past 11 to catch an east coast game.

Nonetheless, we were dressed in spirit of the Boilermakers, and Spencer found a video on the Internet of the "Jumbo Heroes" cartoon Purdue plays before each game.
Posted by Unknown at 7:53 AM No comments: Links to this post 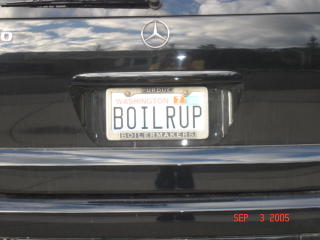 As great as life is out here in the Northwest, there is definitely one pastime I am going to miss: tailgating on fall Saturdays with my college chums. There is nothing like a college football Saturday, and catching the games on ESPN Gameplan won't make up for it. Hopefully Purdue makes a trip out to Pasadena in a few months and we'll be able to catch them =) With Michigan and Ohio State off the schedule, this should be Purdue's year.
Posted by Unknown at 12:49 AM No comments: Links to this post 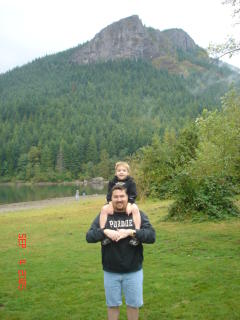 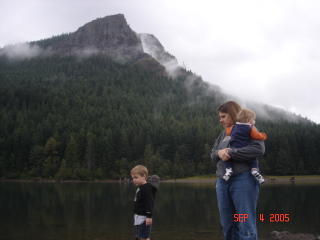 Since it rained today, we looked to do something close to home... that something was a quick trip out to Rattlesnake Lake. It's a state park about 10 miles southeast of us.

It rained too hard for us to do much, but we did get to venture out the lake a little and enjoy the great views of the mountains.
Posted by Unknown at 9:46 PM 2 comments: Links to this post 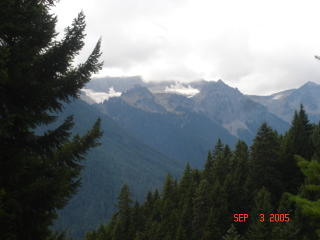 After three and a half months we finally took a trip to Mount Rainier National Park on Saturday. We didn't know what to expect; as such we just grabbed some sweatshirts and took a drive. It was very cloudy, so we never did see the top half of Mt. Rainier; however, the views on the way up to Sunrise (6400 ft) were amazing.

There are plenty of turnoffs, hiking paths, etc. on the way up, and we didn't even take the preferred/popular route. All in all it was about a two hour drive from our house to Sunrise Point, and 45 minutes of that was within the park. 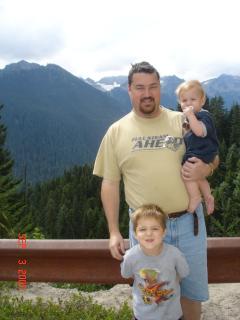 Posted by Unknown at 9:16 PM No comments: Links to this post