In my line of work I manage, interact with, am dependent on, or otherwise am involved with "projects" on a regular basis. By "regular" I mean at any point in time over the last several years I probably have at least a couple dozen projects I am either responsible for or depend on directly. And I am by no means unique - most of the working world deals with projects.

For some reason, as time goes on it bothers me more and more that the measure of a project's success is whether it's "on-time and under budget." Seems so outdated and uneducated.

In The Power of Product Platforms they quote a statistic that, paraphrased, states that:

Projects that deliver the most value (ROI) are the most late and the most over budget.

You can rephrase in a number of ways, but I always boil it down to: "if it's worth doing, it's going to be hard."

There are a few reasons I hate the "on-time, under budget" mentality, mainly that it rewards the wrong behavior (as happens any time metrics/rewards are not aligned with desired outcomes).

Instead, all projects should always have a Net Present Value associated with them that's calculated on an ongoing basis, updated as new data (costs or project revenue/benefit) is uncovered. Guess what, when a project's NPV goes below $0, the project is canned.
Posted by Unknown at 1:07 PM 2 comments: Links to this post

Yes indeed, another year has come and gone. Time for a little reflection on what was 2005...

Brought in the year with a boom with the addition of Garrett to the family. Amy and I are now real parents having to chase two little tikes around and ensuring neither one of us gets adequate sleep.

My three year stint at Whirlpool came to a close. I really enjoyed what I did there, and many a person that I would bring into our lab would exclaim "Wow you have a GREAT job!" Last few months were probably my most productive there and I really felt I had built a great team and a great pipeline. Alas, I did not see much further growth in my future and I chose to move on.

I made a decision a couple years ago that my next job would be with one of the big five in my space: Microsoft, eBay, Google, Yahoo, or Amazon. My preferences were eBay/Google/Amazon in the first tier, MS, in the next tier, and Yahoo in the last tier (for some reason Yahoo really doesn't interest me as a company). After bombing an onsite interview in 2004 at Amazon, I didn't give up and continued to look for opportunities at the big five, and was rewarded with a job offer this past April. And what a change on our life that started.

Before we moved we got to have a birthday party for Spencer and got to see a lot of our friends for what we knew would be the last time for quite a while.

We didn't give ourselves much time to move (3 weeks between offer acceptance and moving), and in the end that was probably a big mistake. Put a lot of unnecessary stress on us, especially Amy. Lesson learned, and the next time we pack up the homestead we'll know.

House-hunting was quite a challenge as we moved during the hotest period of the market. All the cash that we thought we did well on our house sale simply got deposited in the seller's bank account of the house we bought this year.

My parents, my sister, and Amy's parents were able to make it out to see us for about a week during the summer. Glad they came during the nice weather of the summer! And I got to see my Uncle who I don't get to see too often (he lives in Spokane; Amy and I want to take a trip to the other side of the state sometime).

Two of my former direct reports moved out to Seattle in late summer, which was nice. Both seem to be enjoying the area as much as Amy and I are.

Amy was able to go back to the midwest in Oct for a couple of weeks and took Garrett and Spencer. I was very worried about her traveling with an infant and a little turd but the boys did great.

Purdue had a crappy year in football, but given their success over the last 10 years or so they were due a losing season. To make it worse Notre Dame had a good year in football.

Went back to the midwest with the family for a week over Thanksgiving. Great to see everyone and nice to see the midwest again, even if it was snow and cold.

Side fact: for the last four years Amy and I have lived within 30 miles of Tyrone Willingham's work. But I digress.

I now follow Illinois basketball more than Purdue basketball, as Amy and I are big Bruce Weber fans (Weber was an assistant at Purdue and I'm convinced he was the genius behind Keady's success).

The Lions still suck. Sheesh. A sure sign that everything is well in the universe. And I'm an idiot for continuing to buy NFL Sunday Ticket to keep watching them every week. I'm pretty sure all Lions fans have some sort of mental condition.

Picked up a PSP back in March, and what a great pickup. Just as I predicted, movies on UMD would grow in numbers and boy have they. We use the PSP more as a portable movie player than we do for games. Have Robots, Toy Story, and The Incredibles for it. Keeps Spencer plenty occupied on those long flights to/from the midwest.

Another toy: my Harmony 880 remote control. Way too expensive, but what a great device. One click coordinates multiple devices (click on "Play DVD" turns on the TV, sets it, turns on the DVD, turns off the Directv, etc).

My biggest memory of the year is still leaving a hotel in Michigan City on a bus, with my wife, two kids, a couple bags of luggage, and a couple carry on bags. A two hour bus ride to O'Hare where we were getting on a one-way flight to Seattle to find a new life for us all. Not exactly covered wagons and the Oregon Trail, but quite an adventure nonetheless.

Still have the Audi S4 - there are quite a few of those in this area, although I still have never seen another Hibiscus Red S4. Given the number of rainy days here Quattro is a must.

I know I am forgetting lots about 2005. Certainly to be remembered as a big year for me along with:

1988: off to college in another state
1993: move from Detroit to Chicago (that took one van as opposed to one semi-trailer this past year)
1996: got married
1999: bought a house and started a business
Posted by Unknown at 12:03 AM No comments: Links to this post

Going to where the snow is 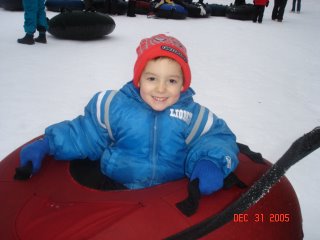 A fond saying here in the Seattle area is "you don't live in the snow, but you can drive to it." Well, we did just that yesterday. The Summit in Snoqualmie is a short 25 minute drive from our house, and we took advantage of their tubing facilities yesterday. Amazing the difference in weather between our home and mountains a short drive away.

Spencer had a load of fun and was disappointed he couldn't take the innertube home!

I'm looking forward to taking up skiing again. I skied a little bit when I was growing up in Michigan, but hopefully I can find time to take it up with regularity.
Posted by Unknown at 11:13 AM No comments: Links to this post