Another crazy Halloween night in Snoqualmie Ridge. With every house having 2+ kids of trick-or-treating age, no wonder this place is a zoo on Halloween.

Spencer dressed up as Jango Fett, which Garrett dressed up as a Dinosaur. I donned my Sergei Fedorov Nike Russian Olympic Jersey as I have for the last five years or so.

More here (including larger versions of the pics).


Posted by Unknown at 9:52 PM No comments: Links to this post

I am most pleased

A most excellent road win for the Detroit Lions today. I caught them in HD on Directv, inviting our Chicago Bears fans neighbors over for some breakfast (yes we have to do breakfast for the early NFL games out here on the west coast) and football. The team stepped it up all the way around - offense, defense, special teams, pressure on the QB, solid DB coverage, excellent D against the run, established the running game, threw the ball downfield, etc. While Chicago is a shadow of their Super Bowl run last year, they are still a good team, and coming away with a win from Soldier (or "Soldier's" if you live in Chicago) is always tough. Kudos to Marinelli for building the team to this point. I have to believe this will instill an awful lot of confidence in the Lions and I believe Kitna's prediction of a 10 win season is highly likely at this point. Go Lions!
Posted by Unknown at 5:04 PM No comments: Links to this post

The University of Washington Husky football program is such a hot item that we scored free tickets through the school for their homecoming game against Arizona. Good friends of ours are Husky season ticket holders and Jim and Amanda were kind enough to invite us to tailgate with them in the shadow of Husky stadium. We had a really good time with our kids playing with their kids, met some new people and shared some interesting stories. Since Seattle folks don't seem to get up early we were pleasantly surprised to find easy parking two and a half hours before game time and enjoyed the great location of the stadium right on Lake Washington.

I've created a SmugMug account to share photos. To date I haven't liked Picasa, Flickr, Facebook, or any of the photo sharing services out there. I've watched SmugMug for a while and the kicker is their wide set of convenient uploading tools especially for Mac and iPhoto owners. I will be putting my entire photo collection up there over the coming weeks. They do charge a fee ($15 a year) but they also have no limitations on bandwidth or photo size which meet my requirements.

Pics from the game are here.

And Jake Locker, Washington's QB, will be in the running for the Heismann next year. One of the best all-around college QBs I've seen in a long time.
Posted by Unknown at 9:38 AM No comments: Links to this post

Snoqualmie in the news

Unfortunately it's because the Snoqualmie Valley School District had to close schools today due to vandalism to the entire school bus fleet. Sigh.
Posted by Unknown at 11:23 AM No comments: Links to this post

A day with Dad

Amy participated in our neighbor's "Crop for the Cure," a 24-hour scrapbooking crop to benefit one of the great charities out there, the Susan G. Komen Breast Cancer Foundation. That meant she was gone all day Saturday, leaving me with the boys on a cold, rainy day in Snoqualmie.

I took the opportunity to of course watch Purdue beat up on Iowa. After that, time to bond with the boys. Between legos, play-doh, video games, football, baseball, cars, making pizza, and some walking around parks, I barely had a chance to get my Saturday nap in. But I prevailed there nonetheless.

Alas we had a good time, I learned I have to keep a close eye on Garrett when I put a full tin of flour in front of him, and that we can have a good time out in the rainy discovering new parks in Snoqualmie.

(If I can get Blogger's photo upload working I will post some pics...)
Posted by Unknown at 9:18 PM No comments: Links to this post

Before getting too excited about Directv's 100+ HD channels...

Did Directv not pilot and test this before rolling out? If they ran into problems, did they not try and fix them? If they didn't run into problems, what was their flawed testing methodology?

This is painful. Downright painful. Methinks when NFL season is over I'll be looking into Dish Network.
Posted by Unknown at 11:46 AM No comments: Links to this post

We took an opportunity today to take a look at the new Snoqualmie Point Park. It will be officially opened on 27 Oct but we dropped by to take a look at the progress. Wow, what a change! They've done a lot of work to add parking, create restrooms, add stone landscape, and provide a large gazebo which provides terrific photo opportunities across the Snoqualmie Valley, Mount Si, the Cascades, Rattlesnake Mountain, and Mount Washington. I think we've found our new picnic area... nicer than Rattlesnake Lake and only three miles from our house!

There are some pics on my Hiking Snoqualmie blog, but I also took some of the family... 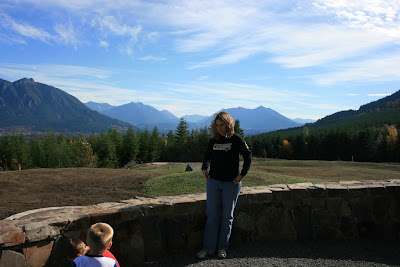 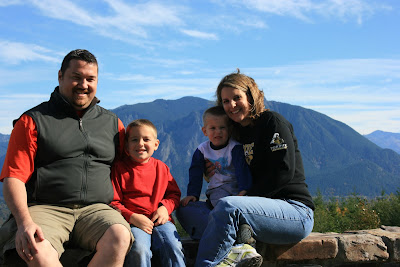 Posted by Unknown at 5:21 PM No comments: Links to this post

Labels: photo, Snoqualmie
Posted by Unknown at 4:56 PM No comments: Links to this post

Posted by Unknown at 10:07 AM No comments: Links to this post

A hike, some football, and a woodshed

Today was an unusually warm and sunny fall day in Snoqualmie Valley, so we took the opportunity to take a quick hike and explore an area of Tiger Mountain we hadn't explored before. We found a cache, and Spencer and Garrett found sticks which they immediately turned into mock guns to chase bad guys in the forest.

We got done with that hike by late morning and made it home to see Purdue getting taken behind the woodshed by Michigan. I'm convinced the women's basketball team would have made it a closer game than this group of wussbags. We have firmly cemented ourselves as the laughingstock of the Big Ten and we haven't beaten a ranked team since 2003. That was against #10 Iowa and Purdue has lost 14 straight against ranked opponents and can't even put up a decent effort against unranked Michigan.

But all wasn't lost, with that pathetic display it motivated me to get outside and play with the boys, where I fine tuned my new camera for sport shots, which turned out pretty well. 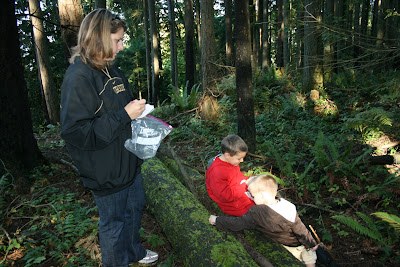 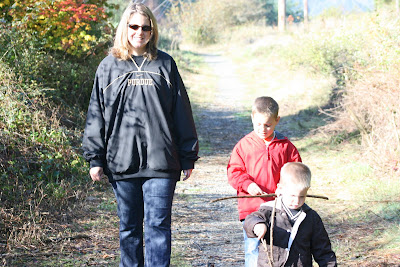 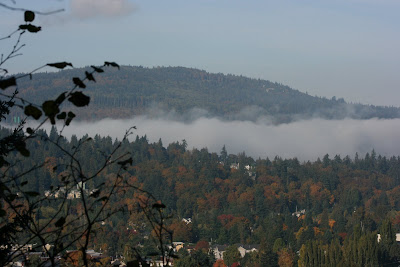 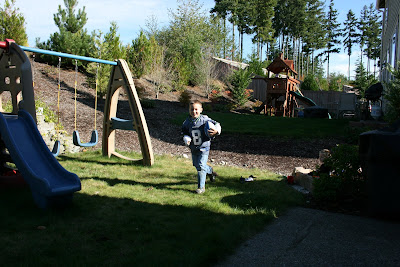 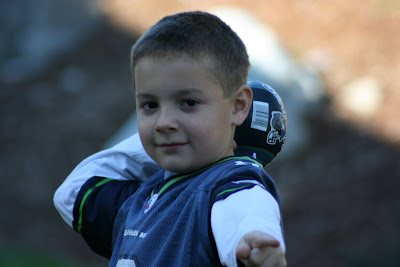 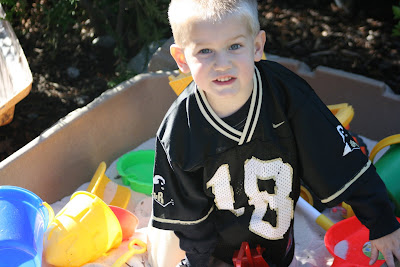 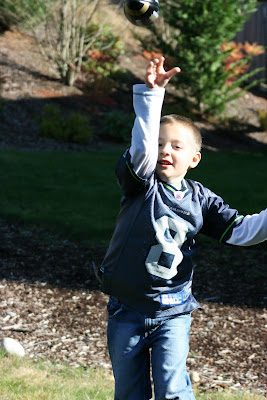 Posted by Unknown at 10:11 PM No comments: Links to this post

Yesterday the Seattle Center hosted Northwest BrickCon 2007, a gathering of lego enthusiasts showing off their creations for the public, mainly kids. I did not go last year (Amy and Spencer went), but all of us went yesterday.

It was impressive seeing the creations that people come up with from a bunch of little bricks. Entire space colonies including monorails and armed troops, medieval towns with moats and castles, cities complete with roads, trains, hotels, restaurants, and condos, you name it. Spencer loved all of it, and Garrett was mesmerized by the trains.

A fun day, not too crowded, and nice to see everyone respect the creations and not touch, dismantle, etc the fine exhibits. 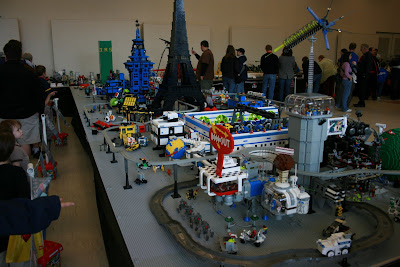 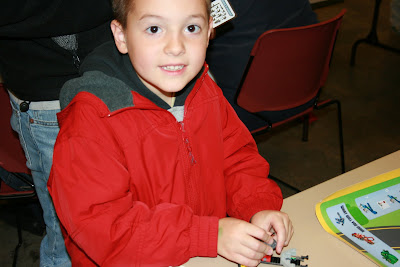 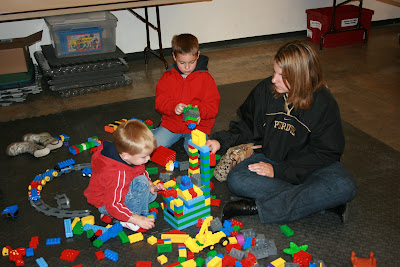 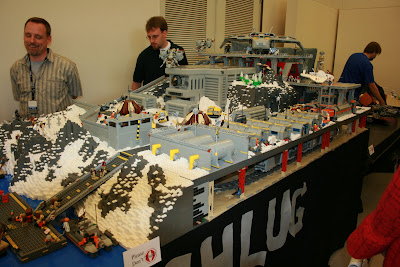 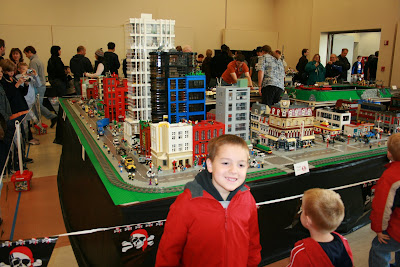 Posted by Unknown at 5:43 PM No comments: Links to this post

Purdue doesn't have big football games very often. Sure, we might have big wins (over #4 Kansas State in 1998, over #5 Michigan State in 1999, etc) but there are very few games that are showdown games mainly because Purdue is rarely undefeated midway through the season.

In 2004 an undefeated and 5th ranked Purdue hosted #10 and undefeated Wisconsin in Ross-Ade. After taking control on the game in the fourth quarter, Purdue blew the game in the final five minutes. Up 17-7 midway through the fourth quarter, defensive back Kyle Smith dropped an easy interception. Wisconsin went on to score to close the gap to 17-14. On the ensuing drive, Kyle Orton fumbled reaching for a first down, and it was returned by the defense for a touchdown. So Purdue gets the ball back with 2 minutes to go, drives the field into field goal range, and the dependable Ben Jones missed a 40 yard field goal and Purdue loses 20-17. Purdue went on four-game losing streak from there and ended the 2004 season 7-5 including a bowl loss to Arizona State. Purdue followed that up in 2005 with its only losing season under Joe Tiller, and in 2006 Purdue, after starting the season 4-0, struggled to an 8-6 overall record. Finally, in 2007, Purdue has an opportunity to set things straight and get the program back on track for its first 10 win season in over 25 years.

The big game is against Ohio State, and I don't have a lot of confidence for three reasons:

1. Purdue's defense has shown itself to be suspect in each of the first five games. We made Notre Dame's "worse offense in all of college football" look like a powerhouse.
2. Purdue has not shown itself to be mentally tough. The 2004 collapse is a great example, as is the 2003 team that boasted nine players getting drafted into the NFL but still couldn't muster a 10 win season.
3. Purdue's "home field" advantage is mitigated by a) Purdue hasn't sold out its season tickets, meaning there will be a lot of Ohio State fans in attendance, and b) the crowd just doesn't seem into it. Our section was awfully quiet during the Notre Dame game.

That said, I'm so psyched. Big games for Purdue are a rarity, and I am so ready! ARE YOU READY TO GO, CUZ I'M READY TO GO! WHATCHA GONNA DO BABY! (Purdue fans get that line)
Posted by Unknown at 2:20 PM No comments: Links to this post

Enjoy
Posted by Unknown at 6:56 AM No comments: Links to this post

A week with my folks

This is a little belated, but my mom and dad visited us a couple weeks ago for ten days while Amy was in Orlando for a conference. The kids loved having them around, as did I, and they took care of making sure Spencer got to and from school and gave Garrett some great experiences while I was at work. We were able to watch the Lions get blown out by the Eagles. We even got a small hike in down to the secret "other side" of Snoqualmie Falls. The weather stayed nice for them until they had to fly out, then the fog rolled in. Some pics of their visit below. 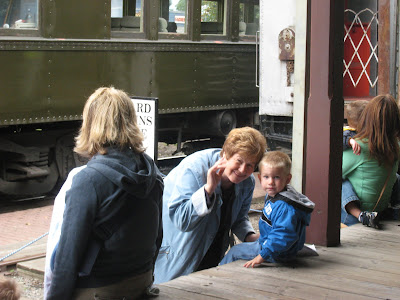 Mom and Garrett at the Snoqualmie Train Depot. 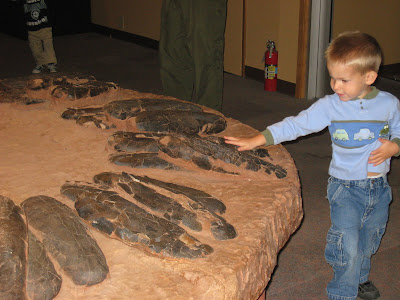 They took Garrett to the Pacific Science Center to see the Dinosaur exhibit. Garrett enjoyed the Dinosaur dig. 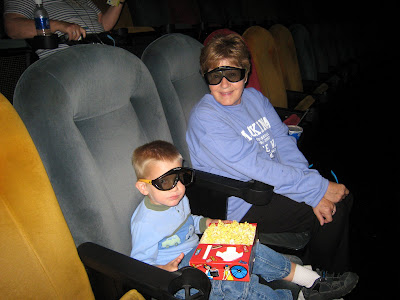 Mom and Garrett in the IMAX theatre for the dinosaur showing. 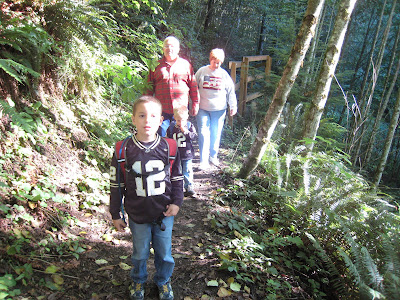 Out for a hike.
Posted by Unknown at 12:12 AM No comments: Links to this post