Guess I was wrong...

Perhaps there are some ramifications to the DA in the Duke LaCrosse case.
Posted by Unknown at 9:15 AM No comments: Links to this post

I made out well on Christmas... a new waterproof, windbreaking cycling jacket, and a pair of cold-weather cycling gloves, both from REI. Tried them out a couple days ago in a steady cold rain, and along with my rainpaints they worked great. I am now officially ready for any weather the Northwest can throw at me.

Obviously the kids had fun on Christmas, and thankfully they did not get up early and we didn't have to start opening presents until 9-ish.

Pics of them and their loot... 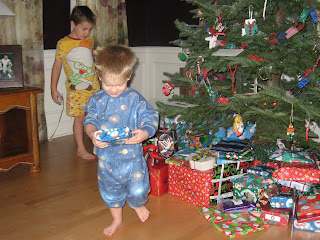 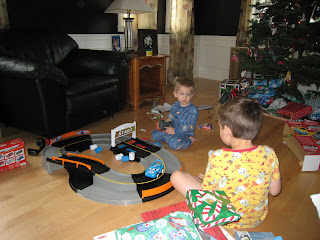 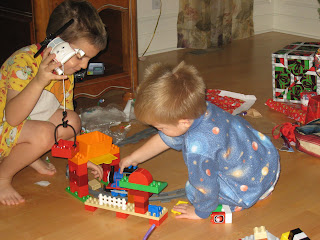 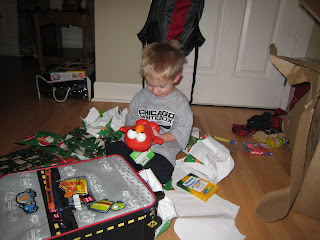 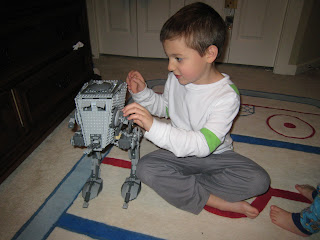 Posted by Unknown at 10:52 AM No comments: Links to this post

Santa already dropped by our house, looking forward to a fun morning with the kids :)
Posted by Unknown at 2:06 AM No comments: Links to this post

A fine day with friends

We invited a number of people over for Chistmas Eve "lunch." but only the Dykstras and Vassighs took us up on the offer. We enjoyed having their families over and partaking in one of my favorite entrees - deep fried turkey! Was a challenge to position the deep fryer in such a way so it didn't get blown over, didn't get rain in the oil, and didn't put the house at risk of burning down. Alas, I found a good location and we had a fine meal, enjoyed a couple of football games, and let the kids play. Perhaps the start of a fine tradition at the Reagan abode.
Posted by Unknown at 8:27 PM No comments: Links to this post 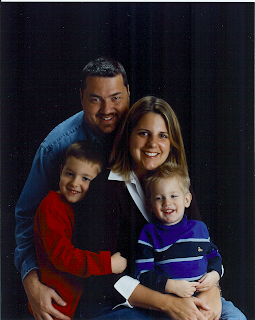 Posted by Unknown at 10:50 AM No comments: Links to this post

Ok, I made it to the championship game as a #4 seed, blowing out the #1 team 93-28. Now I face a team with LaDanian Tomlinson and Chicago as a defense. Ouch, I'm really up a river.

I will start Frank Gore at running back, but for my other starting I have Rudi Johnson, Willie McGahee, and Corey Dillon. I really don't want to rest my chances with Dillon so that leaves Johnson (at Denver) and McGahee (hosting Tennessee). My gut tells me McGahee.

My WRs suck: Larry Fitzgerald, Chris Henry, Heinz Ward, Terry Glenn, and Javon Walker. Walker is a starter, and I will start Glenn. I can't see starting Fitzgerald, so down to Henry vs. Ward. Both can put up big numbers in a game, but rarely do. I need to flip a coin on this one.

Something tells me I should consider starting Henry and Johnson, resting my chances on the Bengals putting up points in Denver.
Posted by Unknown at 8:34 PM No comments: Links to this post

And we should be having dialogue with Iran?

Fortunately I don't have to pontificate too much on this, as someone else has done that for me.

A lot of people's lives were severely impacted on zero evidence. Unfortunately, those that caused the damage won't have to reap what they have sewn.

I am still of the belief that the biggest danger to our way of life is a justice system that doesn't punish false accusations and/or lying under oath. You're talking about the core and basis of an entire free society. If a President can lie under oath with impunity, and the public supports it, why wouldn't other opportunists take advantage of our weak justice system?
Posted by Unknown at 12:51 PM No comments: Links to this post

I would vote for Donald Trump

Just for the record. Way to take off the gloves and pull no punches. Haven't had a politician stand up to a bully since Reagan took on the Soviets.
Posted by Unknown at 12:07 PM No comments: Links to this post

Don't want to jinx anything...

but power is back in Snoqualmie Ridge. Came back last night, and still here this morning, so that's a good sign. Looks like they ran a new line from another substation to our neighborhood, rather than actually fixing the substation and existing downed lines (which will take quite a bit of time). Good news is that hopefully that adds some redundancy for future windstorms.
Posted by Unknown at 6:41 AM No comments: Links to this post

A good friend of mine lost his two year old daughter to a year's battle with cancer. Paige James, rest in peace. God bless your little soul.
Posted by Unknown at 9:47 AM No comments: Links to this post

Another day, no power

I'm losing count of days at this point. Hopefully we have power before Christmas. If not? No big deal, we have heat, food, and water.
Posted by Unknown at 9:45 AM No comments: Links to this post

We awaken on Monday with still no power, but we did learn yesterday that our water heater has no electrical component, just gas and mechanical, so we have hot water for as long as we have gas. Felt good to get a hot shower in our own bathroom!

Yesterday we spent some time driving around the area seeing who had power and where there was damagae, and wow, did Snoqualmie Valley get hit hard. I've never had to drive under power lines that were supporting trees before, and had to a few times yesterday. I think Amy was freaking out when one powerline was no further than two feet from her side of the car.

All in all we are doing well. Aside from throwing some food out, things aren't all bad. The cold weather is keeping milk cold outside, enough areas have power so we can get gas, batteries, food, etc, so really all we are missing is TV. And missing the Lions game yesterday actually seems like a blessing rather than a loss.
Posted by Unknown at 9:08 AM 1 comment: Links to this post

If you'd listen to the radio around here, you'd think this was the early 80s and we just suffered a full nuclear assault from the Soviets, and are experiencing "The Day After." So many references to the poor, suffering people of this area, and so much advise on how to deal with this tragedy.

Sheesh, people, there's no electricity in some parts of the area. That's it. Deal with it.

I will say, I am amazed by some of the callers, especially the one that suggested that the utility companies should have done their analysis and known exactly what was going to happen. I'm sure that caller is right... there are supercomputers out there that can tell you exactly which trees are going to fall on which power lines, and which transmission towers were going to topple in the mountains.

At least I haven't heard anyone blame this on Bush yet, although the weekend is still young.

Thankfully, Amazon has power and showers... family went down to the locker room today and enjoyed some refreshing hot water. Now off to some downtown Seattle dining, and over to the Seattle Center. Oh, the suffering my family has.
Posted by Unknown at 1:11 PM No comments: Links to this post

Skylight is back on the roof

But power is out and rumor has it it will take over a week to sort all this out. Puget Sound Energy says 2/3 of their customers are without power.
Posted by Unknown at 2:33 PM No comments: Links to this post

No power, no skylight

Wow, so that's what it's like to sleep through 30-50 MPH winds with 80 MPH gusts. Not much sleep at all, and the wind blew the skylight off our roof. At least the weather cleared up for now, but thunderstorms and snow expected on the way.

We're lucky, I already know three people that had trees fall on their house.
Posted by Unknown at 9:09 AM No comments: Links to this post

Batten down the hatches

Now that I think of it, I don't know how to spell "Batten". Battin? Baton? Whatever. The storm of the century is apparently hitting the Pacific Northwest this evening, with 100 MPH winds expected in the Cascades (uh, that's where I live). Snow line will drop from 3000 feet to 1000 feet, and blizzards and avalanches are on the way. We've already lost power once, and I expect we will lose power for quite a bit of time this evening. We've already grabbed food, batteries, and glow sticks for the kids. The fireplace is on, and we're ready!
Posted by Unknown at 7:04 PM No comments: Links to this post

Time to fix the BCS

Assuming the BCS needs fixing, after all. Here we have a system that the media asked for, and the media continues to whine about. I actually don't think the system is broken, and am glad we are getting a great Rose Bowl game even if it isn't for the MNC.

Of course, what the dipshits (and I'm being kind in using that word) in the media can't seem to grasp is basic math or common sense. Geez, guys, figure it out. NO system is going to "fairly" resolve picking 1 of n > 1 deserving teams for a slot (or two of n > 2 teams deserving of a slot) in the BCS title game. It's called math, and I'm pretty sure Spencer even understands that.

So, playoffs at Div I isn't going to happen, so what do we do? I have the answer.

This year, Lloyd Carr, on Sunday could jump on a plane, and be in the locker room with the #2 team when they go live on ESPN. He could then throw down the BCS gauntlet in front of Urban Meyer while yelling "LET'S GET IT ON, BITCHES!", challenging them to a game the following Saturday, right there on national TV. Game would be played at Florida. Not a playoff, but it ends the nonsense. Of course, this is not a perfect solution, as you are going to have years where multiple teams are left out, but at least we wouldn't see whining Urban Meyer in the BCS championship this year.

Frankly, I'd rather see Boise State play Ohio State. They have a better argument to be #2 than Florida does.

Go Bucks. A win by four TDs will be nice.
Posted by Unknown at 10:23 PM 1 comment: Links to this post