It was six months ago when Spencer and Garrett took their first steps on the ice over in Kirkland. This past week they spent two and a half hours each morning at the ShoWare Center in Kent attending the 2010 Rob Sumner Hockey Camp (Coach Sumner coaches the Seattle Thunderbirds). In addition to some of the coaching staff, four Thunderbirds players helped out each session.

I must say, one of the best experiences I've had as a parent by far. The kids got to play on the ice of their hometown team, the Thunderbirds players were terrific teachers and role models, the camp drills were well-suited to the kids, and they were nice enough to let a 5 year old and a 9 year old play in the 6-8 year old group. About the only thing missing was having the Jumbotron on. Garrett going all out to get back on defense. Spencer driving hard to the boards to keep the puck in the zone (his specialty). 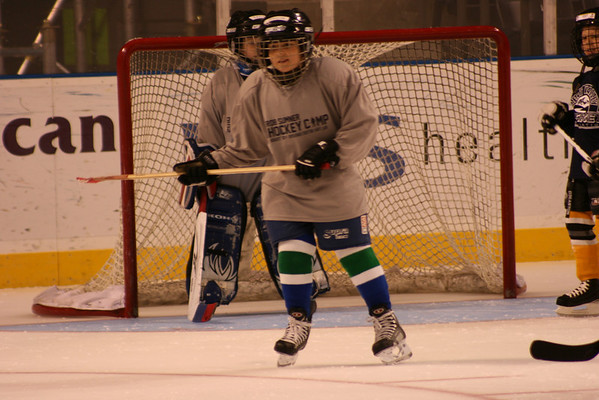 The formidable S-Man on D. A favorite of kids this age is the "Superman" drill. Most of the time Spencer and Garrett were broken up into different groups; was nice to watch them on the ice at the same time during one of the scrimmages.
Posted by Unknown at 3:52 PM 1 comment: Links to this post